30 May The North West Quest by Christoph Speer

If you grew-up and live in Hobart then you probably know something about the North West of our beautiful little island.  Perhaps you’ve been there a couple times and seen the wonderful sights, great surf and magical coastline.  But if you’re anything like me and you’ve spent a lot of your time working or studying and only been able to get a few days off here and there between holidays to somewhere more exotic and lets face it.. warmer.. then you’ve probably missed a great deal of Tasmania’s West and North West coast.

Everyone’s been to the East coast of Tasmania and drank in the sights of Freycinet with a cold six pack and a car full of surfboards (these are interchangeable of course).  However, not every Taswegian has really soaked in the wildness and remoteness of the West and North West.  From Hobart, you really need a good four days to see it, two of these being mostly driving if you’re not sharing the load.  So, more often than not it’s put in the basket of ‘yeah it’s amazing but I could spend more time on the East coast or in Melbourne or… etc..’ and the North West remains relatively untouched by Hobartians.

In my current situation, I am proudly voluntarily unemployed and had the time to visit these remote places.  Back from my trip up the East Coast of Australia, my car was already fitted out to sleep-in and I headed out into the wilderness to find a Tasmanian Tiger, good scenery and nice waves.  The trip would take me to the West Coast at Queenstown, journey through the Tarkine and finish up at Stanley in the North West.

As I had a late start from Hobart and the Lyell Highway is known for its wildlife and windy roads, I decided to stop over at Lake St. Clair on the way, camping at Lake King William.  That night the air was cold, the lake was low and there was a real sense of isolation.  Great!  Queenstown was the next stop and I had woken up at 5:30 am to make sure I could see all the mountain lookouts and short walks on the way.  The best by far on this section of the highway is easily the view to Frenchman’s cap from Donaghy’s lookout.  A must if you’re in the area as it’s only a 40 minute return walk and the view on a clear day is almost as good as the walk to the summit itself.  Some short time later I was in the moonscape of Queenstown for some lunch.  Even though the landscape is scarred from past environmental degradation due to mining, there is something charming about the small township that feels like a town in an old western movie.

After lunch it was time to head over to Zeehan and beyond to Corinna, where I would be ferried over the Pieman River on the Fatman Barge.  Leaving Zeehan I made sure to have plenty of petrol, water and snacks for the drive.  Even though the road is under 100 km, there is so much to do and see and there’s only a pub and some mining in-between for respite from the wilderness.  As I turned-off onto the road towards Corinna, the real adventure began.  The road gets narrow and it’s mostly gravel now.  The vegetation on the side of the road seems to creep on over the road and onto the car, trying to reclaim what was once cleared.  The Pieman river and the area around it is one of the peaceful areas I’ve ever been to in Tasmania.  It’s remote, wild and relatively untouched apart from the tiny township of Corinna.  I spent a good amount of time walking through the rainforest here and following the tannin stained Savage river along it’s banks.  It was so still and quiet in the forest there that you could almost imagine a Tasmanian Tiger crossing your path and the trees talking to one another.

The road I took to the North West is called the Western Explorer.  This is aptly named as for a good 70 km there is nothing in-between Arthur River and Corinna except for spectacular button grass moorlands, quartzite peaks, untouched rainforest and a road so rough an gravelly that Bob Dylan couldn’t even sing about it.  I personally think this is one of the best drives there is to do in Tasmania and I’m surprised Tourism Tasmania doesn’t talk it up more.  After stopping for a climb up the Longback mountain and viewing the scenery for awhile, I was getting itchy for a surf and wanted to be at Couta Rocks by nightfall to surf Marrawah in the morning. 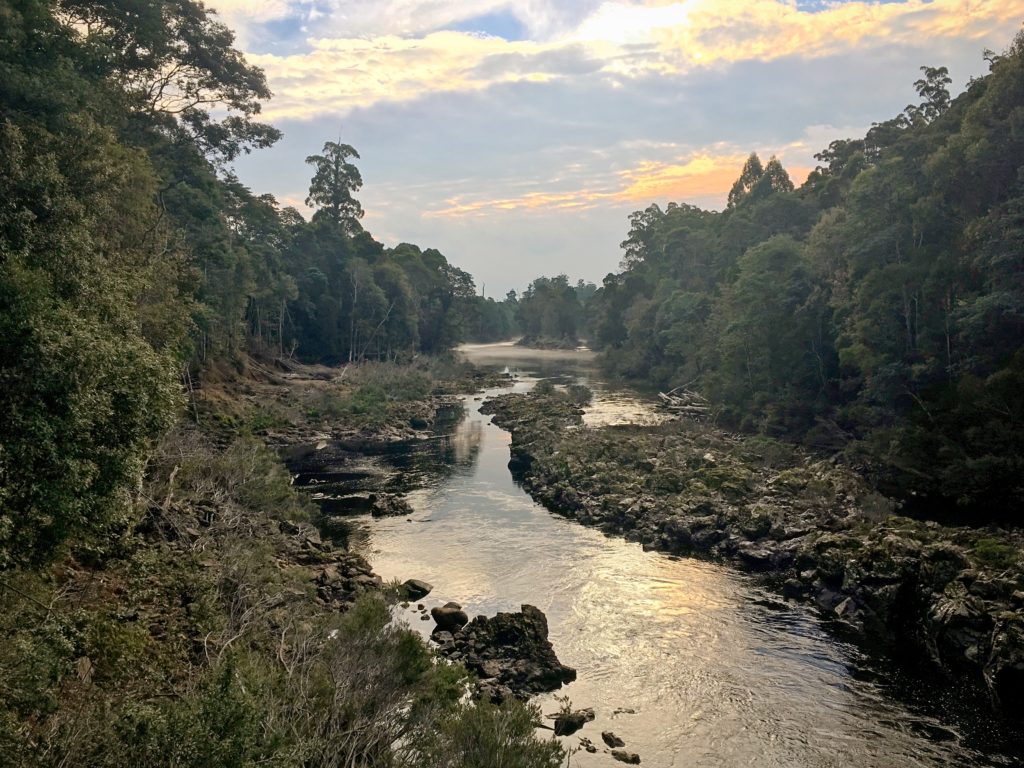 Another early start on the beach at Couta Rocks and I was heading through to Arthur River and Marrawah.  Arthur River has to be one of the most dangerous yet amazing waves I’ve ever seen.  I witnessed heavy, long, dark barrelling waves at the river mouth with no-one on them.  The size of the logs in the water, the strength of the rips and currents and the isolation here was enough to have me passing at the idea of surfing here by myself.  But it’s an untouched spot just waiting fro some action when it’s small enough to surf.  After refuelling at Marrawah and taking some time to acquaint myself with the various beaches and points, I decided on my spot and went into the surf.  The first thing I noticed about the West Coasts waves was the power.  Four foot swell here feels like six or eight and the rips are strong.  The escalator rip I was sitting in had me out the back in a matter of seconds and as a local said to me ‘it’s a dream’.  After catching my share of right handers I headed back in for some pasta and breakfast.

After breakfast, the Tarkine awaited.  This area of the North West contains the largest tract of untouched rainforest in Tasmania and for good reason, has become a popular but often by-passed attraction.  Spending a night here and taking my time exploring the upper reaches of the Arthur River and the rainforest was worth every minute.  If you haven’t been to this part of Tasmania yet and are wondering what all the fuss is with the great forest debate that plagues Tasmania, then come here and you will understand.  There is a reason why there is such strong opposition to the forestry operations in the area and thankfully, this area has bee saved.  My favourite stops in the area were the Trowutta Arch, Balfour’s Track and the Arthur River stop-off’s.

The next day brought the small town of Stanley and after a brief (but steep and windy) walk to the top of the nut, had me reflecting on my trip to the North West of Tasmania.  The variety of communities and landscapes throughout Tasmania really is special, and a huge chunk of that lies on the West and North West coast.  The surf here is big, the rainforest wet and the landscape untamed, and personally, that’s just how I like it.