Posted at 12:16h in Surf by RHSonline
Photos and words by Gab Morrison @gmfilm
4:50 AM came a little too quickly, mostly due to the previous night’s late movie which probably wasn’t the most forward thinking idea. Living in the moment is always great until the morning after. The streets lay quietly in the pre dawn darkness only disturbed by the slightly worrying (but pretty common) clanking sound spewing from my car. A dull street lamp feathered light onto three sleepy eyed shadows as I pulled into our pre-determined meeting spot. It was not much short of a miracle we all arrived on time. A quick car shuffle and cram-as-much-stuff-in-as-quick-as-possible ensued before we hit the road. Glowing clouds flitted along beside us until the sun burst over the horizon in an explosion of pink, orange and red fireworks. 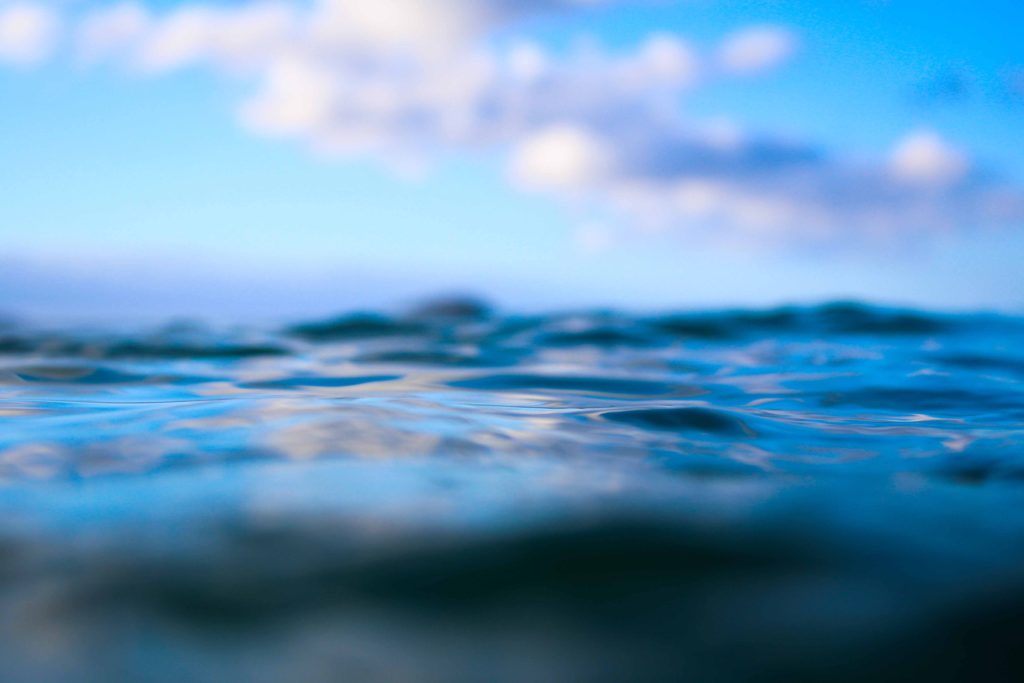 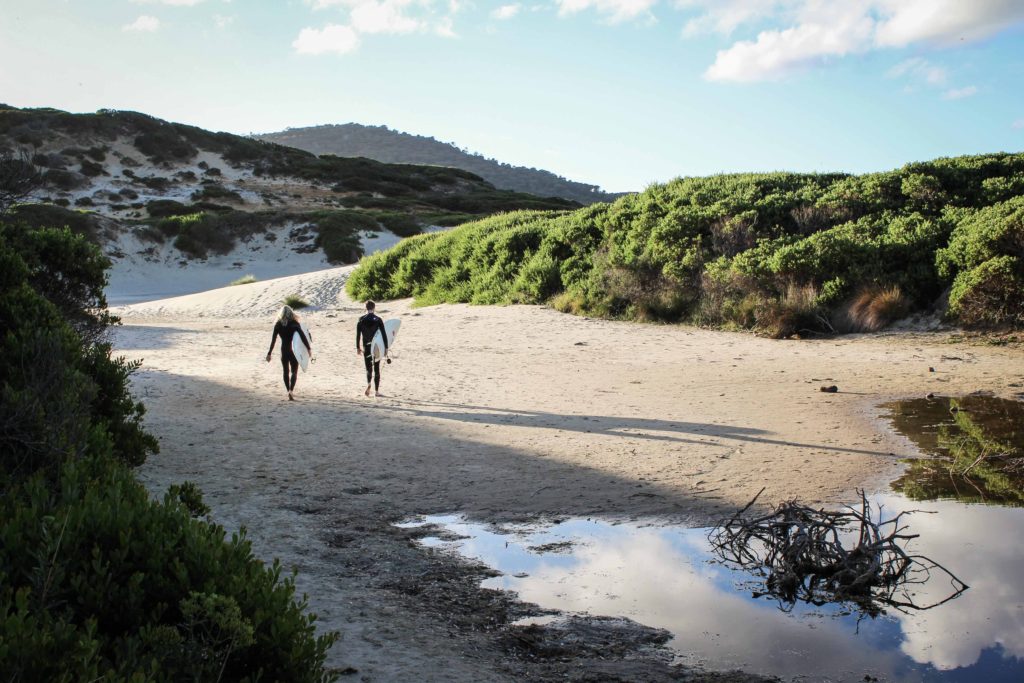 Although the day was predicted to be hot, the air was still cool in the post dawn light as we scampered up the dunes for a surf check. The bay that welcomed our eyes is a particular favourite of mine. Tree topped hills roll down to natural grassy plains full to the brim with bracken (more than any bracken boy/girl could want). Creviced sedimentary cliffs reflect dreamy sand dunes that dissipate into the cold Tasmanian water. The banks are regularly good here (or maybe I’m just lucky??) for Tasmanian standards and nine times out of ten I’ll emerge smiling from the green blue water. On this morning it was small but clean and offshore. We had known this in advance and despite promising each other we would bring our longboards we some how ended up with four shortboards stacked in the car. 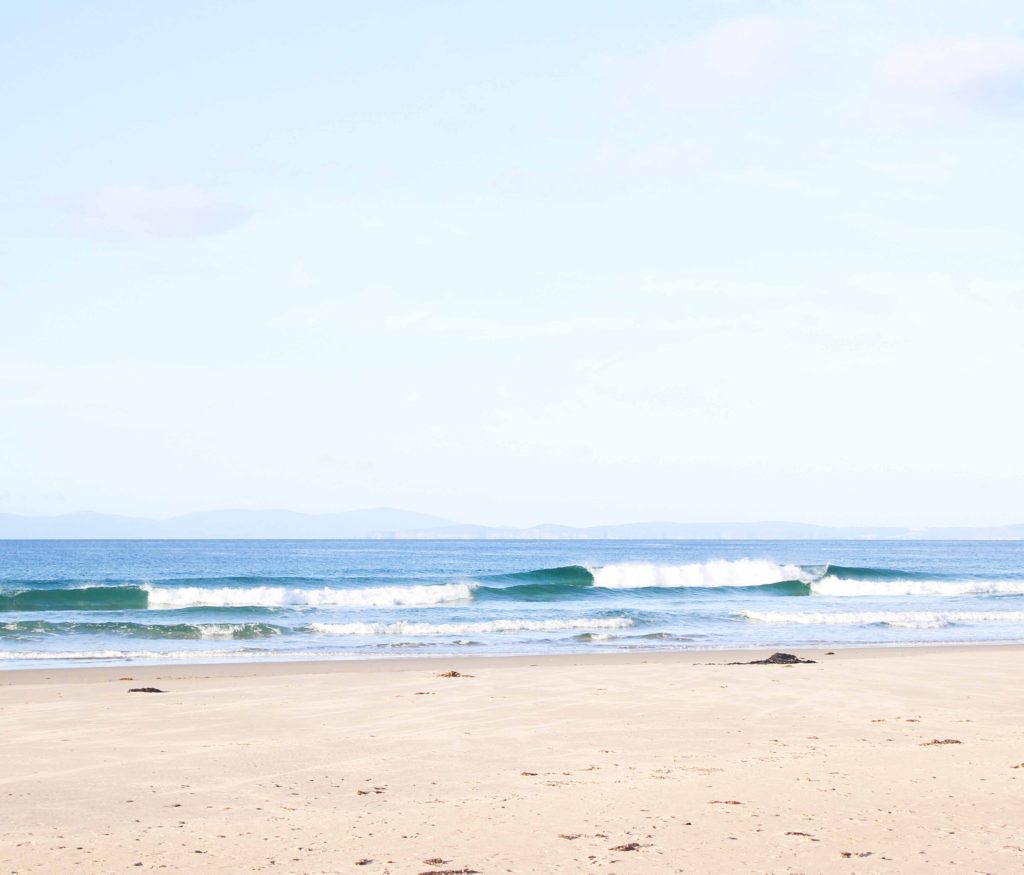 The first hour turned on for us, maybe it was Huey rewarding us for the early wake up which I personally find one of the harder challenges in life. One to two foot mini walls were groomed in the freshening offshore wind and sets came at regular intervals allowing the whole crew to stay occupied doing their favourite wave weaving standup activity. 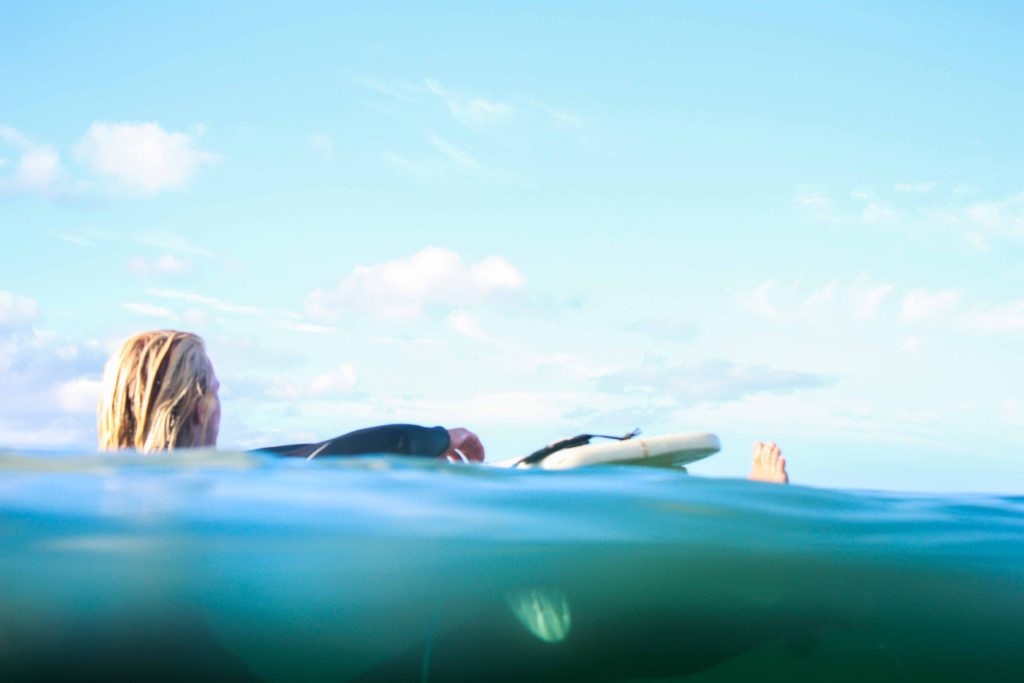 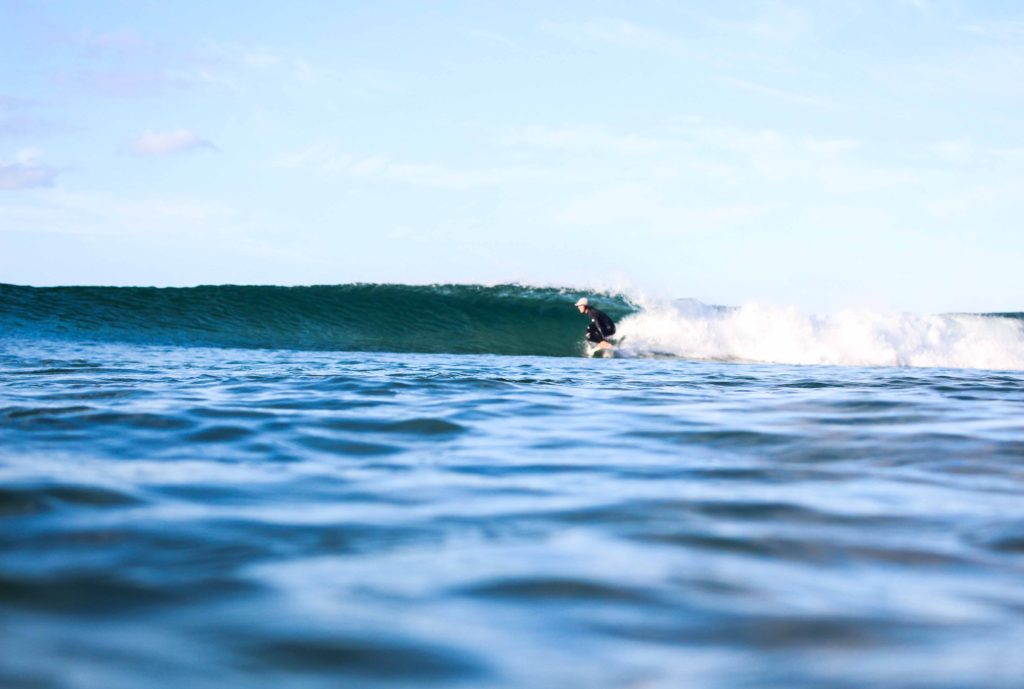 At this point some worrying dots appeared on the dunes that looked very much like surfers checking the surf and getting ready to jump in. After quickly considering my options (worst case scenario they are SUP’s, best case scenario they are eaten by land sharks on the walk down) I promptly sprinted up to the dunes and dropped my camera in a slightly terrible hiding place and replaced it with a board.

The swell dropped as the sun rose but we made the most of it and had a fun splash, even making a new friend Stephan. Stephan is a local and lives in a house concealed in the bushes behind the beach. He seems to have life pretty sorted out. This was evident as he had brought a longboard which was definitely the weapon of choice for the day. 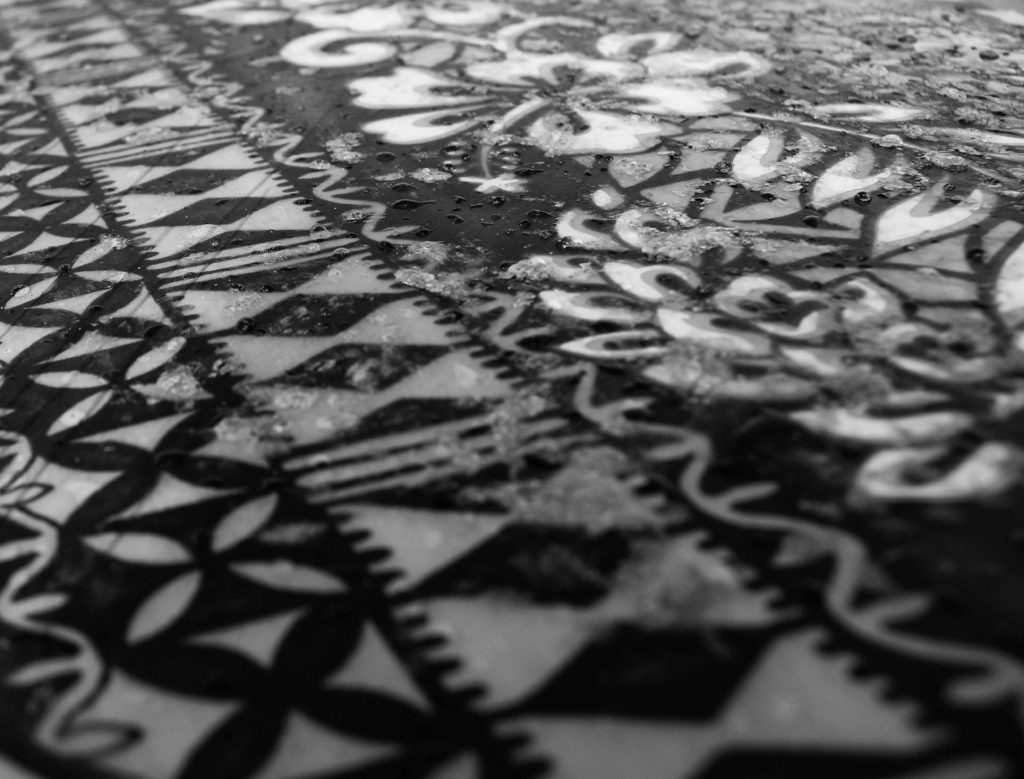 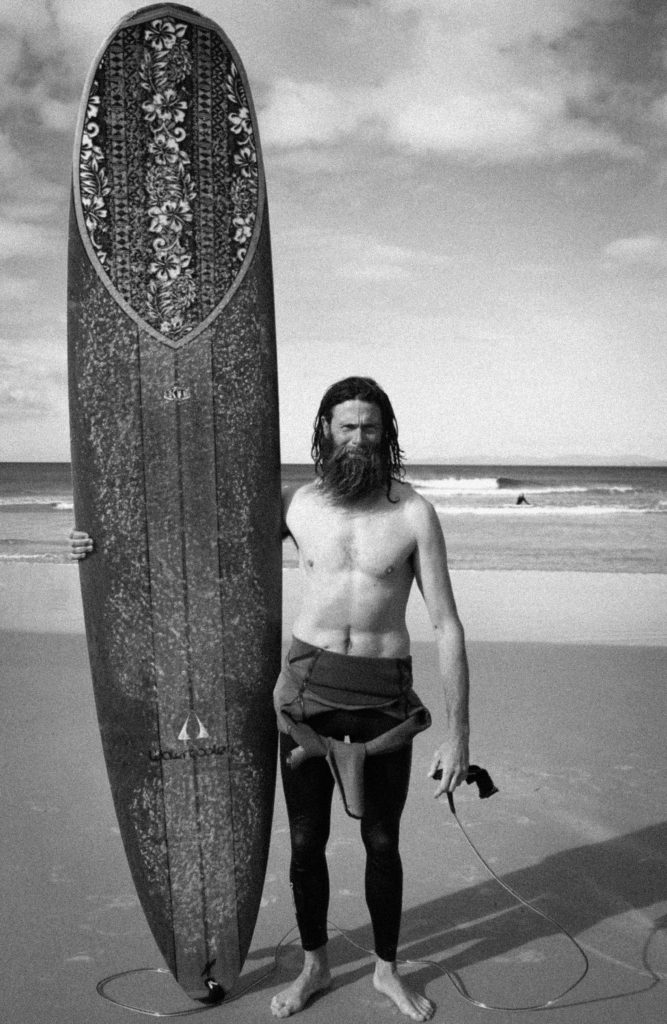 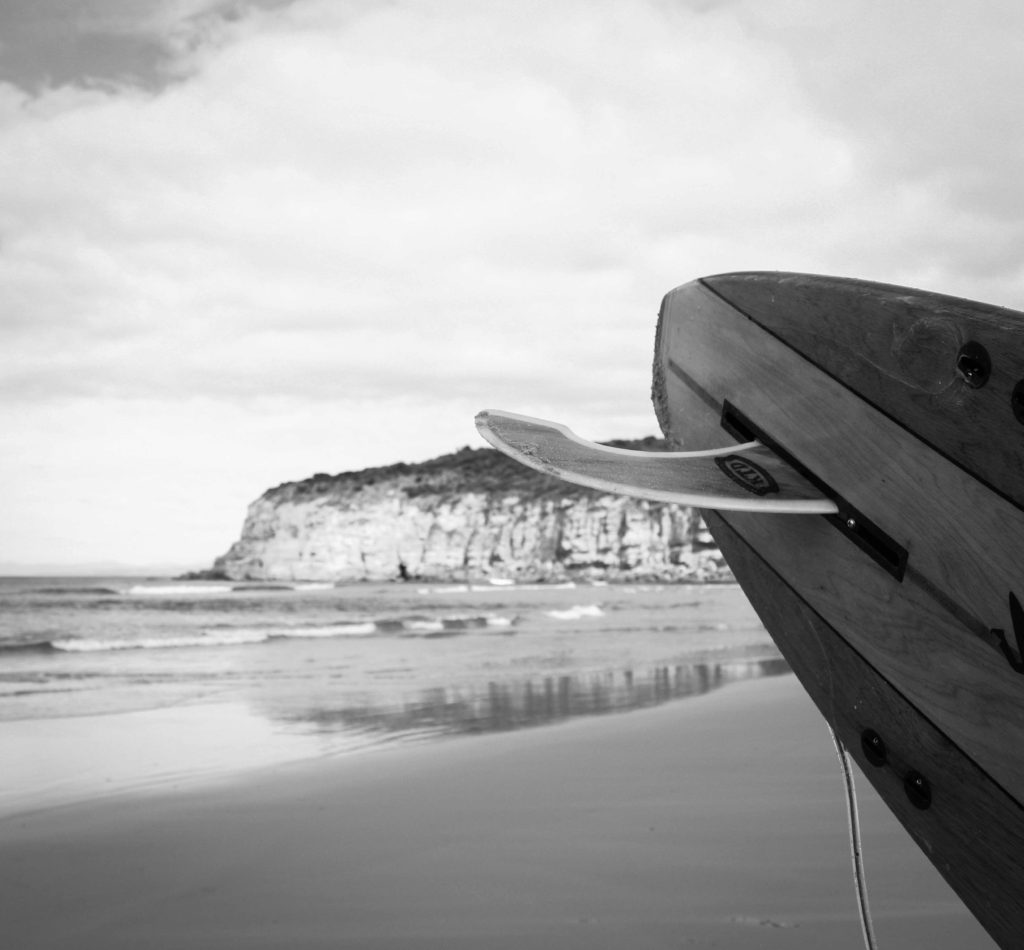 Maybe one day we will grow a wise, salty beards and remember to bring longboards.
Until the next morning mission,
Gabriel Morrison