A Long And Elaborate Holiday That I Will Need A Holiday To Recover From In Indonesia - Red Herring Surf
1580
post-template-default,single,single-post,postid-1580,single-format-standard,woocommerce-no-js,ajax_fade,page_not_loaded,,qode_grid_1300,transparent_content,columns-4,qode-theme-ver-12.1.1,qode-theme-bridge,wpb-js-composer js-comp-ver-5.0.1,vc_responsive

One day in December, I tottled off to Indonesia. I got to Kuta in the middle of the 9pm and decided that I would gather my 100kg of belongings and drag them to the nearest meter taxi, so I could save myself $5 and spend it on 2.5 magnums.  So I lugged them past cabman after cabman and the prices dropped as I walked further and further until I had one guy down to $5 which was insane but I had already walked so far that I had to decline and he couldn’t believe it because we had traveled like a k together and he thought he was in for a ride (literally ha). All of a (very long) sudden I was on the main highway and I waved a cab and it stopped in the middle of the highway and the guy got out and somehow smuggled my 10 meter long board bag into the cab and put a seat down and had a small conversation in no hurry at all as the cars racked up behind him. Anyway the whole thing cost me 25 000 rupiah so about $2.50 (plus 30 minutes labour and declining insistent cabbies). So I get to my hotel and sit by the pool for a minute just soaking it all in and celebrating life and my uni results with my first (of many) mixed juice or juici when all of a sudden a couple of women in their mid 60s float on by and we get chatting and turns out they are – lo and behold- Tasmanian! And legends at that! Aaaand we talked about this and that and they said they were on their way home tomorrow and did I want their conditioners and so forth and I said yes please and thank you one can never have enough with such dry and brittle hair as myself. So the next morning I got a call from reception and I thought they were trying to make me pay for my room because I hadn’t done that yet but they said that the chicks had left me a hamper of delights and would I come down and did I want the knife. All very strange I wasn’t sure what type of conditioner you slice up but it turned out they gave me all this Mersey valley and delicious brie cheese and crackers and gin and chocolate! What a dream! So I ate it all almost and saved a bit for my good friend Oliver Bowe who was due in that night by distracting myself with massages and pedicures and bartering for wooden penises and jiggy jig hats. Well that is many words already for just 24 hours so I will have to briefing this (the full works is available for $42.50). Anyway Oliver Bowe (OB) arrived (also by metered cab because we are friends because we both love a bargain) and we headed to Sumbawa but before the flight took off OB decided he needed some top of the range serious double plugger thongs called some particular brand was it Endo? so we ran all over Kuta to find them and every shop said they had them but they didn’t and then they said their friend did and followed us to the next shop so it was kind of like an Indo version of the pied piper. So OB got the damned thongs and we rushed back to the hotel and just made our flight (by about 17 hours because it was delayed significantly) and as we were waiting there I realized that for real the guys should have rung to remind me to pay for the room because I forgot and I was so scared I wouldn’t be allowed out of the country because they had a picture of my passport (luckily I emailed them and sorted it out the 30$ saved wasn’t worth the bad karma). 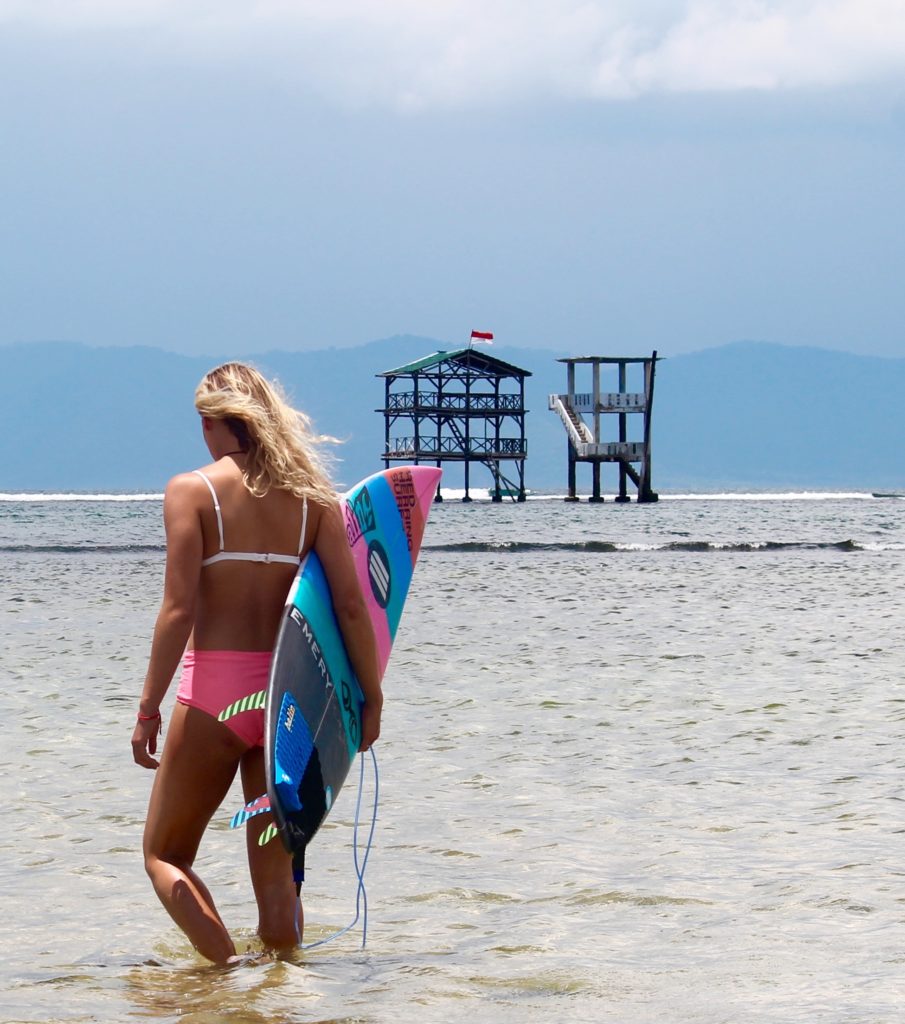 We arrived and it was super windy and I can’t remember much of what we did as my memory is sporadic and comes in flashbacks like I am permanently drunk (I’m not, it has been like this since I was 3 and it kicked into gear). Anyway Christmas came around and myself, OB, our friend Dougall from the Caribbean, the French yoga instructor Julie who was on the same plane as us and le French boys all boogied into the night at fat mahs, the d floor is a little shakey one guy who was  legend actually sadly fell right through the floor and broke his leg and nearly lost it actually because it got infected. Christmas day we got pumping waves and had a box of bang bangs for breakfast and banana pancakes and fruit salad on the side. As the new year ticked over there was a massive cake fight and we went swimming to wash it off and all of a sudden we were being blasted with fireworks from all directions and it was so scary but awesome watching them bounce off the water next to you for about 3 hours (not even an exaggeration there was still the odd firework going off at 3 in the afternoon on the 3rd Jan). 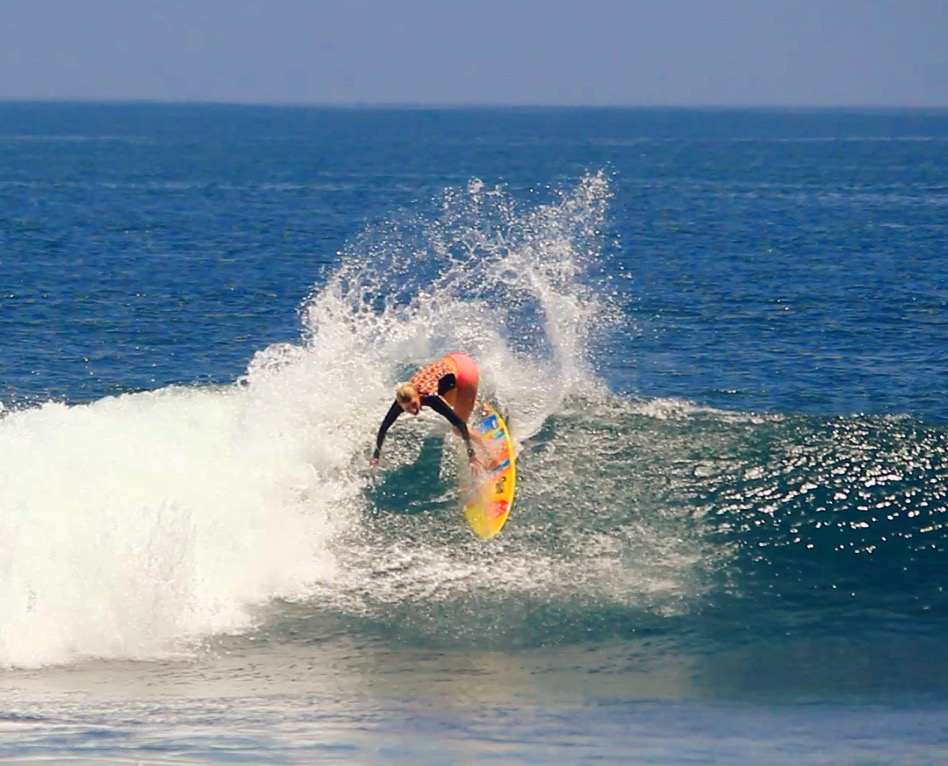 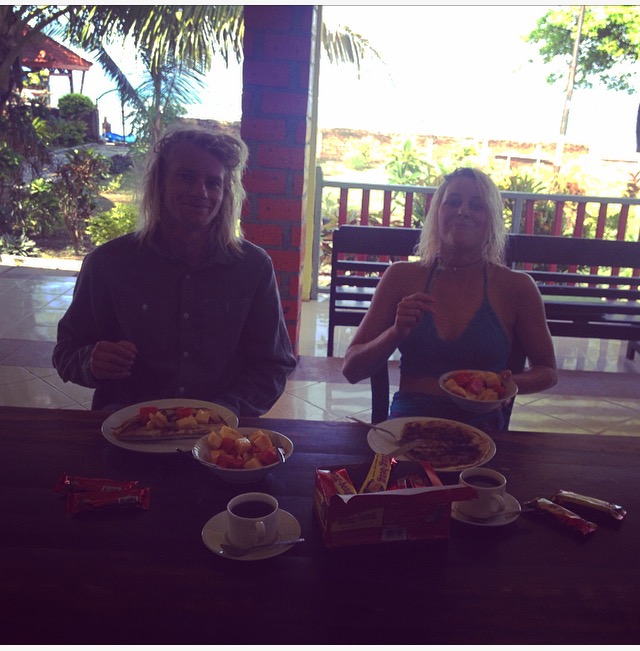 In the new year(seramat tahun baru – happy year new), one morning I was just waking and OB was about to check the surf and getting out of bed and it was just dawn and the air conditioner started to rattle and we both watched it with fascination. Then the whole room started to rattle and it was kind of like nothing I’ve experienced before like a bird being a bird rattled in a cage (not that that’s ever happened to me either). OB looked at me and was like ‘Get out Brooke’ and ran out of the room and I had a quite confrontation with the mosquito net and was right behind him and the bricks started to fall off the roof and it was so scary! It was an earthquake! There was a variety of scantily clad poms all on the front lawn everyone had rushed out into the open in case the place fell down. We were all very scared about a tsunami and trying to decide whether to go up into the mountains of for a surf and we ended up going surfing and were very lucky there wasn’t one, although I did get one very long ride so it was questionable. It was kind of scary going to sleep for a few days as that was one of the gnarliest things I have ever experienced.

But when one doesn’t die one forgets about it in the end after a few appreciative days with many mixed juices and lots of surfing and we live on. We made good friends with this family from Cabarita. We called them the family of frothers because they were all so excitable, especially mama froth you could hear her a mile away. Many an adventure occurred with Froth Family. They also played a lot of pool. One day OB and I took the paddle board out without the paddle at Lakey Pipe and it was extremely sketchy.

THE ARRIVAL OF KUPA, THE TIMS AND SNAKES

Later on Kyle Cooper (aka Kupa because Kyle was not possibly a word in the Indonesian vocab, neither was Brooke now you mention it I was called Bruce by most people) joined us and we met a group of Swedish filmmakers both called Tim, it seemed everyone on the island we met was called Tim actually it got to the stage where we would be like, ‘..and you must be Tim’ and they often were- LIFE IS CRAZY! Surfer Tim dropped in on me so I didn’t like him much to begin with but he grew on me and Filmer Tim was covered in tats and had to be dragged out to the peak on someone’s legrope so he could film. I did it once and it nearly killed me and I was so tired I didn’t get a good wave until he was getting dragged in again. No we did have a few good sessions with those boys, especially Kupa. Hopefully we will now be Swedish moviestars- watch this space. One time I was following Kupa in after the best surf of my life happy as you like and this black and white sea snake was cruising towards me. I froze, because the general consensus on the island is that they are deadly (most people say they bad snake and kill you, the odd punter says tidak apa apa harmless). It swam right into me and got tangled in my legs and I kicked and screamed and paddled all the way in from the peak calling for Kupa who was just ahead of me but was so deaf due to water in ears that he had no idea I was in the jaws of death. Another time I dodged Mr Reaper was when my board rack fell off my bike en route to periscopes and a massive (land) snake crawled past and I just stood on the seat quivering with fear waiting for it to go by so I could get my board and put the rack on and then hurry away baroooommmmmm only to get there and nearly be eaten by a pack of rabies dogs because everyone loves coconut biscuits. It was very hard to stay alive on the island there was many illnesses going round and most people were on one antibiotic or another, sometimes two. I was prescribing paracetamol left right and centre and stitching dogs and it was terribly exciting. 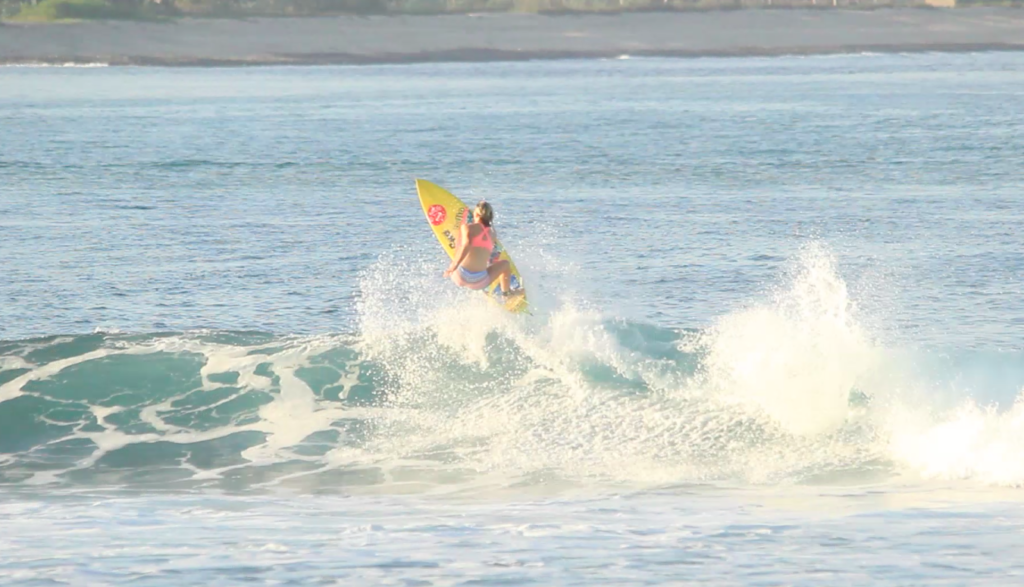 All of a sudden the 5.5 weeks had come to an end and it was time to go home and have one last pancake and surf with all the Tims and poms and it was terribly sad but we had so many various infections between us and my feet were so burnt from hot rocks I had to crawl to the surf and burritos and be carried around the airport on a luggage pram so it was probably time, but I’ll be back to flirt with Mr Reaper again and definitely won’t forget all those new legends I met. Till we meet again in your mansion in Biarritz Mr French Groundsman, in your bungalow in the Caribbean Sailor Doug, in 9mm hoods in Norway goddess Guro and Tim #716 and in exotic maroubra with Greg.